It should come as no surprise that I always get hyped up about all the literary/bookish awards happening every year. What can I do!? They’re a great way to discover some new amazing books and authors I would not have read otherwise!

As somebody who wants to one day break into the publishing world, bookish events and awards are absolutely fascinating to me. Having so many talented writers, publishers, and translators competing for a financial (and symbolic) prize is a mind-blowing concept to me, and I always daydream about finally being involved in the election process of one!

The shortlisted books for most of these awards have still not been announced, but I’m still excited for the events because of their excellent track record. Because I don’t carry any ground-breaking news with me, unfortunately, I decided to compile this list and include a recap of what happened in 2017 and what is to be expected in 2018.

This is just the cannon of literary awards, in a way. If you know of any more of these events (such as those run by indie and smaller publishing houses), please let me know in the comments — the more the merrier!

Note: These are all listed in chronological order, not in order of awesomeness.

The Costa Book Awards is given to outstanding writers for showing outstanding talent with a specific book. The award was created in 1971 as the Whitbread Literary awards, and Costa has been running the awards since 2006 when the competition changed its name yet again.

Only authors based in the UK or Ireland can be considered for the award, and their works must fit into one of five categories: First Novel, Novel, Biography, Poetry, and Children’s Book.

The category winners were announced on January 2 2018, and I have listed them below:

— Biography Winner: In the Days of Rain by Rebecca Stott

— Poetry Winner: Inside the Wave by Helen Dunmore

In 2016, the Costa Book of the Year Award was given to Sebastian Barry for his novel Days Without End. The novel follows two brother-in-arms as they enlist to fight in the Indian Wars and in the American Civil War in 1850. Their day-to-day life is a constant fight for survival, but nevertheless they can see the beauty in the world around them. Everything changes when their path crosses that of a young Indian girl, and they must make life-changing decisions.

I am excited for the award to be given out even though I haven’t read any of the category winners (*hides in a corner in shame*). All of these books sound terrific! I’m most excited to read Gail Honeyman’s novel, as well as Rebecca Stott’s biography (I have a big fascination with learning more about cults, so I definitely can’t wait to get my hands on it!).

Note: Sanne, booktuber at booksandquills, made a video with her picks from the Costa Book Awards Shortlist. It’s an amazing video and it mentions some books that were not the category winners, but totally worth checking out! You can watch the video here.

Everyone has heard of the Pulitzer Prize, be it the one for fiction, for non-fiction, poetry, history, or the ones dedicated to several aspects of journalism. I was first interested in the Pulitzer Prize for Fiction because of the shiny “stickers” they put on books that are either honorable mentions or winners of the award. They are so good at catching your eye in the bookstore, no matter how shallow that may seem!

The award is given out to American authors whose work deals with American life (even though this isn’t a strict requirement), published in the previous calendar year.

The 2017 winner of the Pulitzer Prize for Fiction was The Underground Railroad written by Colson Whitehead. It is still sitting on my TBR shelf, and since the day it came out it has been intriguing me.

The novel follows Cora, a slave in a Georgian cotton plantation in the pre-Abolition Era. She is looked down upon by everyone — her masters, as well as her fellow slaves — because of her family. As she grows older and becomes more mature, she and the recently-arrived slave Caesar decide to flee up north, however they are being hunted down. Whitehead was awarded with the Pulitzer medal “for a smart melding of realism and allegory that combines the violence of slavery and the drama of escape in a myth that speaks to contemporary America.”

This book takes a different approach to the theme and era, which makes it unique. It envisions the Underground Railroad as an actual system of connecting tunnels and tracks, leading from the Deep South to the North.

Although we don’t know what the nominees are, I’m still extremely excited to find out the winners and honorable mentions when they are announced in April.

The Stella Prize Award is a relative new-born when compared to the others on this list, as it was awarded for the first time in 2013. It is awarded to female Australian writers for their fiction or non-fiction works published in 2017.

The aims of the award are written in their website’s “about” page, and one that I found particularly interesting states that it seeks to “equip young readers with the skills to question gender disparities and challenge stereotypes, and help girls find their voice.”

This particular point sparked my interest in this lesser-known award. I am always interested in reading books that shift the ever-changing perspectives of gender roles, and women’s literature is dear to my heart.

Last year’s winner was Heather Rose for her novel The Museum of Modern Love. This novel focuses on attendees of the performance-art exhibition put on by Marina Abramović at the MoMA in 2010, “The Artist is Present.” Serbian artist Marina Abramović sat completely still for seven-hours each day, and invited attendees of the museum to sit opposite her and stare into her eyes.

Rose uses this exhibition as a background for her novel, and her characters are ordinary people attending the exhibition who are profoundly moved by it. The central character, Arky Levin, is a film-score composer dealing with the separation from his wife — a terminally-ill woman who has shut him out of her life. This encounter with Abramović affects his creative genius, and puts him on a path of growth.

As a fan of art, but extremely confused by modern-art installations, I couldn’t not be interested in this book. I’m planning to read it sometime in February, just in time for the longlist announcement of the award!

The Rathbones Folio Prize is open to all works of literature written in English and published in the UK in the previous calendar year under any genre (except those dedicated primarily to children). It is also a recent award, being hosted under this name for the first time last year. 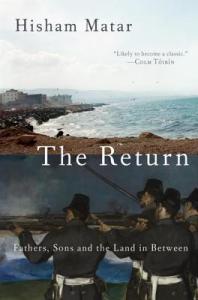 The 2017 Rathbones Folio Prize winner was Hisham Matar for his memoir The Return: Fathers, Sons and the Land in Between. In the aftermath of Qaddafi’s overthrow, the author returned to his native Libya in search of answers for his father’s disappearance.

When Matar was twelve-years-old, he and his family went into political exile. Eight years after that, Matar’s father — former diplomat and military man with ties to the political rebels — was kidnapped from the streets of Cairo. The believed suspect is the Libyan government, and it is believed that he was held in the regime’s most infamous prison. Hisham Matar’s journey to look for answers for his father’s disappearance takes him to the now-empty prison, but as he writes — hope is “persistent and cunning.”

What particularly interested me about this award was its flexibility in accepting works written by authors of every nationality, as long as they published them in the UK. As a new book award, I feel like maybe not a lot of people know about it, so I wanted to bring it into the book-blogging community.

The Man Booker International Prize’s rules for contestants accepted changed in 2016, now being awarded to an author and translator of any nationality. Its aim is to recognize and encourage the publication of works not written in English and its translation for the English-speaking markets.

Last year’s award was given to Israeli author David Grossman and translator Jessica Cohen for his book A Horse Walks into a Bar, originally written in Hebrew. Set in a comedy club in a small Israeli town, a comedian exposes a wound he has been living with for years — the choice he had to make between the two people who were dearest to him. As he crumbles onstage, the audience is fixed on the comedian as the novel progresses.

In 2016, the first year that the award was given to a translated work, Korean writer Han Kang and translated Deborah Smith won the prize for Kang’s novel The Vegetarian. This novel follows three different perspectives, and in each one a different character gives their perspective of a single female character. Kang has said that this novel is an exploration of violence, innocence, and how we can never truly know others.

I read this book for the Booktube-a-Thon and reviewed it here. Unfortunately, I was not a fan of the book at all, as I ended up rating it as a one-star book. However I can see what the judges saw in the book — “in a style both lyrical and lacerating, it reveals the impact of this great refusal both on the heroine herself and on those around her. This compact, exquisite and disturbing book will linger long in the minds, and maybe the dreams, of its readers.”

What I find truly fascinating about this award is the emphasis the organizers decided to give to the art of translation. As a person who is considering translation as a sourse of income, this comes as no surprise.

The Women’s Prize for Fiction is awarded every year to an author for an oustanding full-length novel written in the previous calendar year. It is open to all female writers, regardless of nationality, as long as their work was written in English and published in the UK.

In 2017 the award went to second-time winner British author Naomi Alderman for her novel The Power. This science-fiction novel centers around young girls around the world who have started to develop “the power” — the ability to send electric shocks from the tips of their fingers. This all leads up to an event known as The Cataclysm where women are now the dominant sex in society.

I have not yet read this novel, but I am very excited to. I have never been a fan of science-fiction novels, but the plot seems interesting enough and it’s definitely different from other speculative novels I’ve read.

Ayobami Adebayo’s Stay with Me was shortlisted in 2017, and it was one of my favorite reads of the year. It is set in Nigeria, the author’s native country, and it follows a woman — Yejide — who wishes with all her heart to get pregnant. A child is the wish of her family, of her husband, and of her in-laws — so much so that the latter suggest that Yejide’s husband takes a second wife who can conceive, unlike Yejide. This is a tale of love, of motherhood, of societal expectations, and of wishing and dreaming. I absolutely loved this novel, and I highly recommend it!

Previous winning books for the award include Ali Smith’s How to Be Both, Eimear McBride’s A Girl Is a Half-formed Thing, and Chimamanda Ngozie Adichie’s Half of a Yellow Sun.

These are just a few of the literary events I’ll be trying to follow this year. The publishing industry is so big and so many events and awards are going to be hosted! If you, too, are looking forward to a book award ceremony this year, I’d love to know more about it!